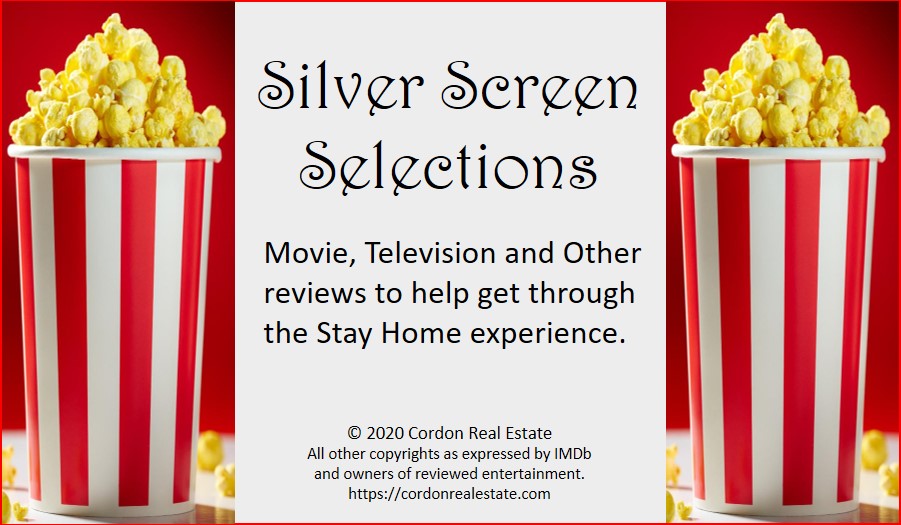 Welcome to Silver Screen Selections, recommended movies and television entertainment to help make current Stay At Home conditions tolerable. Most Selections are not currently being shown in theaters or on TV in their first runs - we'll let current titles do their own advertising. Here you'll find classic and little-known movies and television intended for family viewing. We may also add a few TV shows that are between seasons and could require binge watching to catch up before the new season is released.

Since many different cable and satellite systems serve our readers, we can't guarantee where - or if - you'll be able to find these titles. Many systems offer movies and re-runs of TV shows on demand for no extra charge, some require pay-for-view.

Have a title to share, suggestion or comment? Use the form at the bottom of the page to send it in.

Director: Michael CurtizWriter: Julius J. Epstein, Philip G. EpsteinStars: Humphrey Bogart, Ingrid Bergman, Paul HenreidSummary: The story of Rick Blaine, a cynical world-weary ex-patriate who runs a nightclub in Casablanca, Morocco during the early stages of WWII. Despite the pressure he constantly receives from the local authorities, Rick's cafe has become a kind of haven for refugees seeking to obtain illicit letters that will help them escape to America. But when Ilsa, a former lover of Rick's, and her husband, show up to his cafe one day, Rick faces a tough challenge which will bring up unforeseen complications, heartbreak and ultimately an excruciating decision to make. Written by Kyle Perez

Director: Ken Annakin, Andrew MartonWriter: Cornelius RyanStars: John Wayne, Robert Ryan, Richard BurtonSummary: In 1944, the U.S. Army and Allied forces plan a huge invasion landing in Normandy, France. Despite bad weather, General Dwight D. Eisenhower gives the okay and the Allies land at Normandy. General Norma Cota travels with his men onto Omaha Beach. With much effort, and lost life, they get off the beach, traveling deep into French territory. The German military, due to arrogance, ignorance and a sleeping Adolf Hitler, delay their response to the Allied landing, with crippling results. Written by Jwelch5742

Director: Billy WilderWriter: Charles Brackett, Billy WilderStars: William Holden, Gloria Swanson, Erich von StroheimSummary: In Hollywood of the 50's, the obscure screenplay writer Joe Gillis is not able to sell his work to the studios, is full of debts and is thinking in returning to his hometown to work in an office. While trying to escape from his creditors, he has a flat tire and parks his car in a decadent mansion in Sunset Boulevard. He meets the owner and former silent-movie star Norma Desmond, who lives alone with her butler and driver Max Von Mayerling. Norma is demented and believes she will return to the cinema industry, and is protected and isolated from the world by Max, who was her director and husband in the past and still loves her. Norma proposes Joe to move to the mansion and help her in writing a screenplay for her comeback to the cinema, and the small-time writer becomes her lover and gigolo. When Joe falls in love for the young aspirant writer Betty Schaefer, Norma becomes jealous and completely insane and her madness leads to a tragic end. Written by Claudio Carvalho, Rio de Janeiro, Brazil

Director: Howard HawksWriter: Pat Frank, John Fenton MurrayStars: Rock Hudson, Paula Prentiss, Maria PerschySummary: Roger Willoughby is considered to be a leading expert on sports fishing. He's written books on the subject and is loved by his customers in the sporting goods department at Abercrombie and Fitch, where he works. There's only one problem however: he's never been fishing in his life. When the store owner enters him in a fishing contest, mayhem ensues. Written by garykmcd

Director: Frank OzWriter: Dale Launer, Stanley ShapiroStars: Steve Martin, Michael Caine, Glenne HeadlySummary: Wealthy native Brit Lawrence Jamieson, living in Beaumont-sur-Mer on the French Riviera, earns most of his money through big cons on wealthy unsuspecting women. With the help of his associates, corrupt Police Inspector Andre, who provides him most of his intel, and his butler Arthur, he pulls scams such as pretending to be a foreign deposed Prince who needs money to finance a secret war to liberate his people. Beaumont-sur-Mer, and thus his world, is invaded by brash American Freddy Benson, another con man whose targets are also wealthy unsuspecting women. Lawrence believes Freddy is the Jackal, a con man whose true identity is unknown, but who is known to be working his way through Europe. While Lawrence works on thousands of dollars per scam, Freddy works only on tens or if he is lucky hundreds of dollars. Lawrence's efforts to get Freddy out of his territory are unsuccessful, so when Freddy figures out that Lawrence is a con man like he is, he decides to blackmail Lawrence to work ... Written by Huggo

Director: Dennis DuganWriter: Tim Herlihy, Adam SandlerStars: Adam Sandler, Christopher McDonald, Julie BowenSummary: A Hockey player wannabe finds out that he has the most powerful golf drive in history. He joins the P.G.A. tour to make some money to save grandma's house. The downside is that his hockey player mentality doesn't really go on the P.G.A. tour. Especially with the favorite to win the championship. Written by Kevin Mitchell <kevin@mitchell.mdn.com>

Director: Ethan Coen, Joel CoenWriter: Joel Coen, Ethan CoenStars: Brad Pitt, Frances McDormand, George ClooneySummary: Osbourne Cox, a Balkan expert, resigned from the CIA because of a drinking problem, so he begins a memoir. His wife wants a divorce and expects her lover, Harry, a philandering State Department marshal, to leave his wife. A CD-ROM falls out of a gym bag at a Georgetown fitness center. Two employees there try to turn it into cash: Linda, who wants money for cosmetic surgery, and Chad, an amiable goof. Information on the disc leads them to Osbourne who rejects their sales pitch; then they visit the Russian embassy. To sweeten the pot, they decide they need more of Osbourne's secrets. Meanwhile, Linda's boss likes her, and Harry's wife leaves for a book tour. All roads lead to Osbourne's house. Written by <jhailey@hotmail.com>

Director: Cameron CroweWriter: Cameron CroweStars: Tom Cruise, Cuba Gooding Jr., Renée ZellwegerSummary: Jerry Maguire (Tom Cruise) is a successful sports agent. The biggest clients, the respect, a beautiful fiancée, he has it all. Until one night he questions his purpose. His place in the world, and finally comes to terms with what's wrong with his career and life. Recording all of his thoughts in a mission statement, Jerry feels he has a new lease on life. Unfortunately his opinions aren't met with enthusiasm from his superiors and after dishonorably being stripped of his high earning clients and elite status within the agency, Jerry steps out into the sports business armed with only one volatile client, Rod Tidwell (Cuba Gooding, Jr.), and the only person with belief in his abilities, Dorothy Boyd (Renée Zellweger), with the impossible task of rebuilding what he once had. Along the way, he faces the harsh truth which he'd ignored in the past and a host of hardships that he'd never faced before. Written by Hax_9

Director: David LeanWriter: Boris Pasternak, Robert BoltStars: Omar Sharif, Julie Christie, Geraldine ChaplinSummary: During the Russian Revolution, Dr. Yuri Zhivago (Omar Sharif) is a young doctor who has been raised by his aunt and uncle following his father's suicide. Yuri falls in love with beautiful Lara Guishar (Julie Christie), who has been having an affair with her mother's lover, Victor Komarovsky (Rod Steiger), an unscrupulous businessman. Yuri, however, ends up marrying his cousin, Tonya (Geraldine Chaplin). But when he and Lara meet again years later, the spark of love reignites. Written by Jwelch5742

Director: Melville ShavelsonWriter: Melville Shavelson, Jack RoseStars: Cary Grant, Sophia Loren, Martha HyerSummary: Tom Winters, a widower, is trying to understand and raise three precocious children alone. He gets a little unexpected help from Cinzia, when the children decide she is be the new maid. She is actually an Italian socialite who is trying to get away from her overprotective father. Written by Brian W Martz <B.Martz@Genie.com>

Director: Nancy MeyersWriter: Nancy MeyersStars: Jack Nicholson, Diane Keaton, Keanu ReevesSummary: Harry Sanborn is an aged music industry exec with a fondness for younger women like Marin, his latest trophy girlfriend. Things get a little awkward when Harry suffers a heart attack at the home of Marin's mother Erica. Left in the care of Erica and his doctor, a love triangle starts to take shape. Written by Keanuette

Director: Robert ZemeckisWriter: Diane ThomasStars: Michael Douglas, Kathleen Turner, Danny DeVitoSummary: Joan Wilder, a mousy romance novelist, receives a treasure map in the mail from her recently murdered brother-in-law. Meanwhile, her sister Elaine is kidnapped in Colombia and the two criminals responsible demand that she travel to Colombia to exchange the map for her sister. Joan does, and quickly becomes lost in the jungle after being waylayed by Zolo, a vicious and corrupt Colombian cop who will stop at nothing to obtain the map. There, she meets an irreverent soldier-of-fortune named Jack Colton who agrees to bring her back to civilization. Together, they embark upon an adventure that could be straight out of Joan's novels. Written by Denny Gibbons

Stars: Alexander Dreymon, Eliza Butterworth, Ian HartSummary: The year is 872, and many of the separate kingdoms of what we now know as England have fallen to the invading Danes, leaving the great kingdom of Wessex standing alone and defiant under the command of King Alfred. Against this turbulent backdrop lives our hero, Uhtred. Born the son of a Saxon nobleman, he is captured by the Danes and raised as one of their own. Forced to choose between the country of his birth and the people of his upbringing, his loyalties are ever tested. What is he? Saxon or Dane? On a quest to reclaim his birthright, Uhtred must tread a dangerous path between both sides if he is to play his part in the birth of a new nation and, ultimately, recapture his ancestral lands...

Director: Michael MannWriter: James Fenimore Cooper, John L. BalderstonStars: Daniel Day-Lewis, Madeleine Stowe, Russell MeansSummary: The last members of a dying Native American tribe, the Mohicans -- Uncas, his father Chingachgook, and his adopted half-white brother Hawkeye -- live in peace alongside British colonists. But when the daughters of a British colonel are kidnapped by a traitorous scout, Hawkeye and Uncas must rescue them in the crossfire of a gruesome military conflict of which they wanted no part: the French and Indian War. Written by Jwelch5742

Recommendations/Comments - use the form below.

Stay-at-home have you bored? Check out our Silver Screen Selections – movie and TV recommendations featuring classic and lesser-known titles.

Copyright 2012-2022 Cordon Real Estate or the content providers identified herein. Cordon Real Estate is licensed by the California Department of Real Estate, John A. Souerbry, Broker, License 01370983. This site contains no tax or legal advice, consult with a qualified professional for such services. We do not share information with third parties without your permission. View our Online Privacy Policy (under About Us on the menu bar).