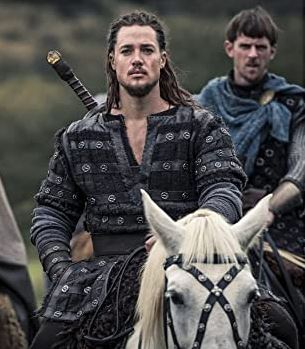 Uhtred from The Last Kingdom

Today’s additions to Silver Screen Selections, movie and TV recommendations to help you make it through stay-at-home, focus on history.

The Last Kingdom (Netflix) is a series that loosely follows the life of a Saxon-born warrior captured as a child and raised by Danish Vikings who settled in Britain between 800AD and 900AD, before the kingdoms were united to form England. Unlike Game Of Thrones, The Last Kingdom is based on factual historical characters, places and events, so even if the dialog seems modern, the story conforms with most historian’s views of people and events during the period. But don’t get hung up on the details or you’ll miss a good story. For deeper historical context, look up Uhtred The Bold and Alfred The Great.

8.4
The Last Kingdom  | TV Series (2015– ) 60min | Action, Drama, History | TV Series (2015– )
Stars: Alexander Dreymon, Eliza Butterworth, Ian Hart
Summary: As Alfred the Great defends his kingdom from Norse invaders, Uhtred - born a Saxon but raised by Vikings - seeks to claim his ancestral birthright.
Countries: UKLanguages: English, Latin
Source: imdb.comDisclaimer: This plugin has been coded to automatically quote data from imdb.com. Not available for any other purpose. All showing data have a link to imdb.com. The user is responsible for any other use or change codes.

The Last Of The Mohicans (1992) is an adaptation from James Fenimore Cooper’s Leatherstocking Tales, novels published in the early to mid 1800’s that follow the life of fictional Natty Bumpo, a frontiersman in colonial New York during the French and Indian War. The events in 1757 presented in the movie are out of sequence compared to the book, but the story works and depiction of the events and many characters is factual. For example, the siege of Fort William Henry is accurately described, including the names of French and British commanders.

7.7
The Last of the Mohicans (1992) 112min | Action, Adventure, Drama | 25 September 1992 (USA)
Director: Michael MannWriter: James Fenimore Cooper, John L. BalderstonStars: Daniel Day-Lewis, Madeleine Stowe, Russell Means
Summary: Three trappers protect the daughters of a British Colonel in the midst of the French and Indian War.
Countries: USALanguages: English, French, North American Indian
Source: imdb.comDisclaimer: This plugin has been coded to automatically quote data from imdb.com. Not available for any other purpose. All showing data have a link to imdb.com. The user is responsible for any other use or change codes.

To see photos and short film clips of today’s additions and our other film and TV recommendations, click here: Silver Screen Selections.