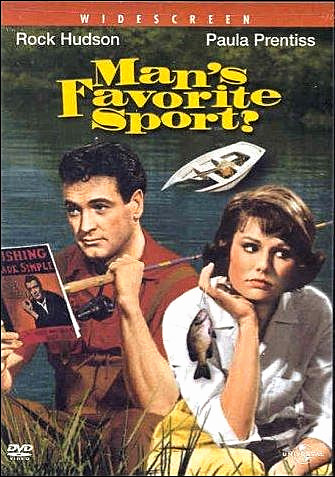 Today’s addition to Silver Screen Selections, movie and TV recommendations to help you make it through stay-at-home, is one of my all time favorite comedies “Man’s Favorite Sport?” Rock Hudson plays a department store employee who literally wrote the book on fishing. Men seek out his advice on how to catch the biggest fish and based on his reputation buy their equipment from the store where he works. When the store’s public relations manager pushes to have him compete in a fishing tournament, she finds out he has never actually gone fishing – everything in his book comes from sporting magazines and other books he’s read. To keep his job, he arrives at the lake a few days before the tournament to learn how to fish and the comedy begins.

Rock Hudson’s deadpan style is lifted by Paula Prentiss’ energy and timing as she tries to prepare him for the tournament without giving away his secret. A wonderful supporting cast includes many familiar faces.

To see photos and short film clips from Man’s Favorite Sport? and our other film and TV recommendations, click here: Silver Screen Selections.

7.2
Man's Favorite Sport? (1964) 120min | Comedy, Romance | 31 January 1964 (USA)
Director: Howard HawksWriter: Pat Frank, John Fenton MurrayStars: Rock Hudson, Paula Prentiss, Maria Perschy
Summary: The author of a best-selling fishing guide is actually incredibly inexperienced when it comes to the sport, which causes mayhem when he is entered into a competition.
Countries: USALanguages: English
Source: imdb.comDisclaimer: This plugin has been coded to automatically quote data from imdb.com. Not available for any other purpose. All showing data have a link to imdb.com. The user is responsible for any other use or change codes.